Music and the football terraces have always had a link and Music is mentioned in the book on several occasions, especially in relation to the City Boys and their musical tastes, which normally cover Punk, Oi!, Ska and Reggae.

Those that have read the book will know that Chapter 13 is dedicated to a trip that I made to Gibraltar, back in March 2014, and last weekend brought back some memories because I was back there. This time for a music festival that is held there every year. I went along principally to see Madness but was impressed by the performances of other artists like Gabriel and surprisingly, for me anyway, Duran Duran. I don’t know if it was the backdrop of the formidable rock, on a late balmy summer night, but the Birmingham outfit took me back in time, maybe it’s an age thing? Madness appeared the following evening and they rocked The Rock with their rock steady beat. I’ve lost count how many times that I have seen them in locations like Newcastle, London, Ibiza, Mallorca, Murcia and now Gibraltar. There’s always a great show put on by the lads form North London.

Since completing the book I have attended a number of gigs in Murcia, at the Garaje Beat Club. The people who run the club are big Ciudad fans and bands like the Skatalites, The Exploited and the Addicts have appeared there over the past year or so.

I couldn’t get to see The Exploited or The Addicts due to work commitments but the Skatalites were brilliant and brought a little bit of Jamaica to a packed house in Murcia. They played the classic Guns of Navarone which is a favourite terrace ditty at Ciudad and that got the whole place absolutely bouncing.

However, for me the best gig at the venue was the appearance of the Cockney Rejects, in October 2014.The big West Ham fans have been one of my favourite bands since I was a kid and their music was a big influence on me when I was growing up. I have been lucky enough to see them a couple of times in London but to see them knocking out their classic terrace anthems in Murcia was something else. 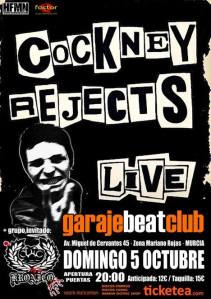 The highlight of the gig was seeing Stinky Turner (Jeff Geggus) wearing a Ciudad scarf during their set. The Sunday night billing affected the turn out a little but those who were there had a brilliant night, as The Rejects bounced about the stage giving their usual energetic performances.

This coming weekend (Saturday 12th September) there is another special musical night planned at the Garaje Beat club. It is the showing of a documentary that covers Joe Strummers time in Spain and is called I Need a Dodge!  – Joe Strummer on the Run.

Following the screening there is going to be a classic Clash set, played by local Murcian band Kolted. The documentary has been distributed by CADIZ MUSIC, who incidentally were also involved in  The Cockney Rejects DVD, East End Babylon that follows their career.

I saw the Strummer documentary, by Nick Hall, in Granada a few months ago and it is a great insight into a part of his life that most people don’t know too much about. You can read more about the documentary HERE

If anyone wants more information on the event in Murcia please contact me.